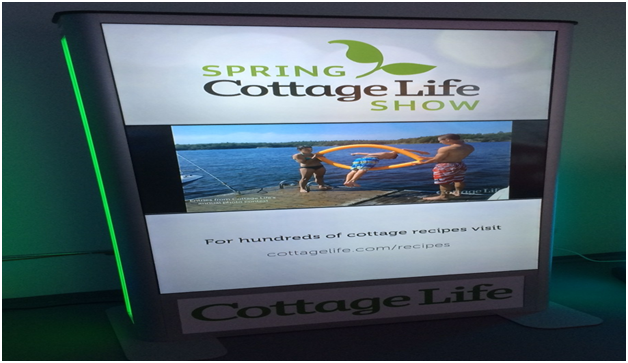 Rather than wading into the already crowded market for digital outdoor, Big Digital plans to focus on portable, temporary and small-scale activations for conferences, retail pop-ups and seasonal displays. It won’t just provide screens, but will consult with clients to design custom content for them.

Girgis told Marketing he got the idea for a service-oriented OOH shop back in his days at OneStop Media, the OOH network he co-founded in 2005. Retail and event-focused clients OneStop worked with couldn’t always make big investments in high-tech, big-screen displays that they only planned to use a few times a year. But, there weren’t opportunities for renting that kind of equipment either — all the digital signage companies OneStop looked into working with only had pricey permanent displays available.

Another big pain point for clients that wanted digital displays for conferences was that they had to coordinate the effort between the AV team that owned the equipment, the creative agency that designed the content, and whoever showed up on site to set everything up, Girgis said. Most of the time, they were doing it without any way to measure its effectiveness.

Big Digital claims it can do all three. “If you could take an AV company and a creative agency and mash them up, that’s probably Big Digital,” Girgis said. “We’ve got digital strategists in-house, and we’ve been doing digital out-of-home for fourteen years, so we understand the tech.”

EMPHASIS ON PORTABILITY AND EASE

If you still think of out-of-home as a traditional media format, you won’t after seeing Big Digital’s standup displays. The team has spent the past 18 months building and testing a range of modular sets that combine up to 12 widescreen LCD screens, as well as LED backlighting, 3G network connectivity, and wifi access points for communicating with nearby devices.

The standard format displays are all named after friendly famous elephants, to make them more memorable and less intimidating. But the modularity gives them a lot of flexibility as well, Girgis said. The aluminum frames can be quickly resized and the signs can be adjusted to create entranceways, digital shelving, or in-store endcaps. Big Digital took inspiration from IKEA’s do-it-yourself philosophy — they’re designed to be set up and taken down in under an hour, by anyone who can read the instruction booklet.

They’re also all brandable, with space for the client to physically white-label each sign with a logo and company name. “We want it to look like the client has spent a lot of money,” he said. 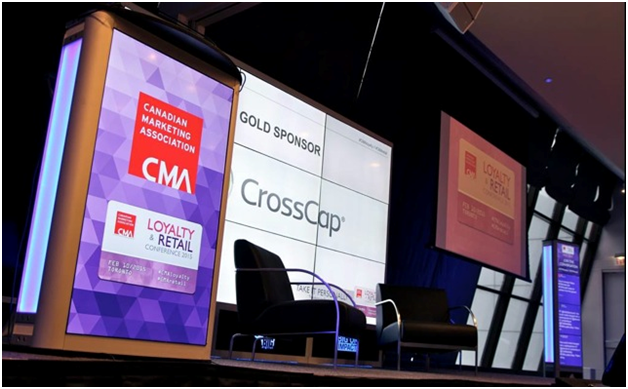 Rather than pitching itself on tech, Big claims its approach is consultative and content-first, more like an experience design agency. In-house strategists figure out what the client’s goals are, whether it’s putting a product or brand on display in high-definition or getting conference attendees to approach and engage with a booth or sponsorship activation. Then, they customize the physical display and design the client’s content around those goals.

The last, crucial component to its service is analytics. According to VP and co-founder Jeff Wismer, Big Digital uses wifi hotspots to track when people (or more accurately their mobile phones) are dwelling near the display. Post-activation, Big Digital will report on how many people engaged with a client’s displays, which activation performed best, and when each one saw the most traffic.

Wismer said for a lot of event organizers, analytics usually extend to number of tickets sold and no-shows. For such a big investment, marketers and sponsors want to see measurable results. Foot traffic heatmapping — the same kind that retailers are starting to do to figure out which of their displays and products are performing best — can add a lot more measurability to events, he said. Big Digital’s reports tell clients how many people showed up, but also what time they showed up, what presentations and showrooms they attended, and when they headed to the bar.

“We’ve heard the numbers from some of our clients, who build these booths and have 50 shows a year,” said Girgis. “You think about the number they’re spending — with no analytics!”

Beyond conferences and events, Big Digital sees an opportunity in the growing popularity of temporary storefronts and pop-up shops. The idea is Big Digital’s one-stop offering is an easy way to add digital flare to a pop-up at a mall or festival, plus the kind of measurability that big-box stores are starting to add. For Me2We’s pop-ups, Big Digital’s screens add an extra layer of big-brand credibility, plus the ability to put a number to the passersby that were drawn inside.

Big Digital’s also experimenting with interactivity, using Kinekt, as well as screens that can stand up to outdoor exposure. Girgis said he sees temporary digital billboards in the company’s future. Where to get kids cars? Use Supplements to Stay Healthy and Treat Ailments The Use Standard of Preservative Sorbic Acid

Gameplay is fair and reasonable

The Worthiness of Dating Coach the USA